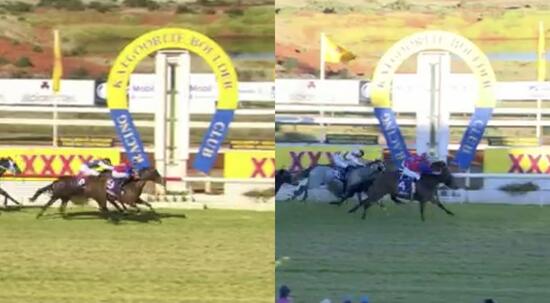 Stablemates Money Twist and Black Lightning brought up a winning double for Pearce Racing and jockey Joseph Azzopardi at Kalgoorlie on Sunday when taking out the Eagle Petroleum Maiden (1600m) and NLD Services Handicap (1400m) respectively.

Money Twist, a Dash For Cash three-year-old, broke her maiden status second-up from a spell when both stepping up to a mile and having the addition of blinkers for the first time.

Starting on the fifth line of betting at $8.50 in a field of eight, the filly jumped from barrier one and settled on the leader's back before Azzopardi peeled off the fence approaching the turn.

After looking under pressure at the top of the straight, Money Twist knuckled down over the final furlong and collared the leading brigade inside the final 75 metres before pulling away to defeat Many Mansions ($8) by a long neck.

Do It Right ($2.90) finished a further one-and-a-half lengths away in third place.

Later in the meeting, lightly-raced mare Black Lightning ($10) got the bob in a tight photo finish when hitting the line locked with Kenny The King ($26).

After jumping from barrier seven in an 11-horse field, the Blackfriars four-year-old settled three-wide with cover before making her run down the middle of the track and taking the whole length of the straight to get her nose down on the line, with Wunderkind ($5.50) and Regal Dividend ($3) less than a length away in third and fourth place respectively.

The Pearces’ only other runner on the day, Superlove, finished fourth in the Goldfields Golf Club Handicap (1100m).