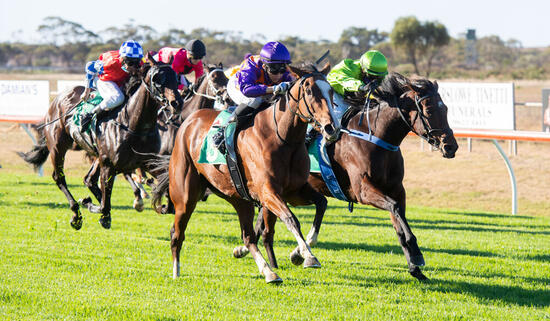 My Admiration three-year-old Speedbird scored her second win in-a-row at Northam on Sunday when producing a last-to-first performance in the Bubbles For Belinda Handicap (1600m).

Continuing her perfect record with Jade McNaught in the saddle, the filly drifted from $2.90 to $3.90 prior to the jump before drifting to the rear of the field from her wide draw but finished with a barnstorming run down the middle part of the track.

The striking bay pulled away over the final 100 meters to defeat Stella Anne ($11) by just over half-a-length, with the well-supported Deputano ($4.20 to $2.65) more than two lengths away in third place.

A new addition to the Pearce stable, Speedbird romped in by almost five lengths at her previous start in Geraldton and has now recorded three wins and a third from her eight race starts to date, booting her career earnings to $84,100 including Westspeed bonuses.

Meanwhile, Pearce Racing's other two runners on the day, Roch Legacy and Quintus, finished second and third in their respective races.

The stable has been in top form, with its past 20 runners netting seven wins and six minor placings.

CLICK HERE to watch the replay of Speedbird's Northam win.