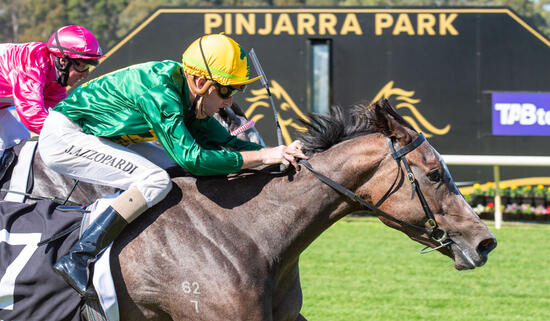 Gingerbread Man three-year-old Born Spicy scored the first win of her career at the inaugural Pinjarra Scarpside meeting on Sunday when leading from go-to-whoa the Rowdycool Air Maiden (1000m).

Ridden by Joseph Azzopardi, the filly was well-commissioned from $5 into $3.30 before the jump and showed good early dash to take up the running and upset raging $1.60-favourite Nowhiteflag by a long-neck.

Racing second-up from a lengthy spell, Born Spicy put the writing on the wall with a solid third behind talented types Just A Pinch and Billy Ray at Ascot on on April 14.

The grey flashed potential when finishing an impressive fourth behind subsequent black type fillies Magical Dream and Snickerdoodledandy after racing wide at her two-year-old debut last June before again enduring a tough run and finishing a narrow third at her following start.

The Pearce stable have prepared five individual winners from its past 12 starters.