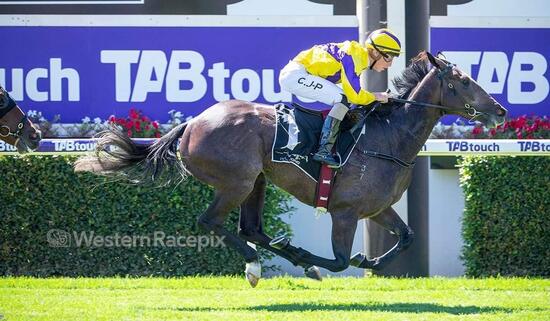 Starting as a raging $1.24 favourite after a slashing second to stakes-winning filly Magical Dream at her previous start, Allmamoney brought up the first leg of a winning treble for in-form hoop Clint Johnston-Porter on the day.

The Al Maher filly relished her first attempt at a mile and, after enjoying a perfect run in the one-out, one-back position, she claimed her rivals at the 200m mark before pulling away to win by more than a length.

Powerful Force ($7) finished in second place, with Warcidium ($12) a further three-quarter length away in third.

Allmamoney is yet to miss a top-two finish from her five race starts to date, having now recorded two wins and three runner-up finishes.

Meanwhile, stablemate Dig Deep was desperately unlucky in the feature event on Good Friday, the $100,000 Listed Old Comrade Stakes (1600m), when held up for clear running and flashing late for an eye-catching third placing.

The Pearce stable will saddle-up Policiere in today's $500,000 Group 2 Amelia Park Karrakatta Plate (1200m) at Ascot, with Pletto and Chiclett also engaged in support races on the nine-event card.