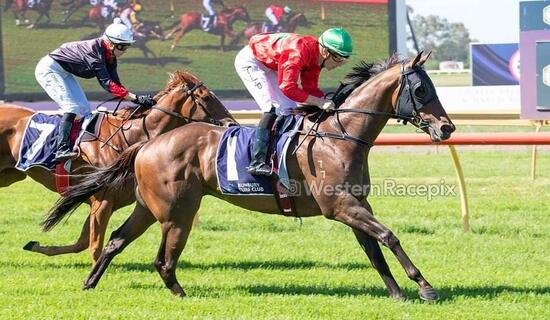 Street Boss three-year-old Zangief broke his maiden status at Bunbury on Sunday when taking out the Bull and Bush Charter Bus and Tours Maiden (1208m) in last-to-first style.

Ridden by Clint Johnston-Porter, the bay gelding started on the fourth line of betting at $7.50 and commenced awkwardly before being relegated towards the rear of the seven-horse field, however, he was able to work off the rail turning for home and let down with a sharp turn-of-foot.

Still having some work to do at the 200m mark, Zangief responded to Johnston-Porter's urgings with a strong finish to race past his rivals and defeat $2.35-favourite Youdoyou by a length, with Brekky With A Bang ($10) a further length away in third place.

Zangief has returned a better horse this preparation and put the writing on the wall for his winning performance when finishing a narrow second at Geraldton first-up on March 3 and has now had six race starts for a win and two minor placings.

The win capped off a good weekend for Pearce Racing and Johnston-Porter after they combined to take out the Listed Seacorp Grandstand Cup (1500m) with Dig Deep at Ascot on Saturday, as well as an eye-catching second with progressive filly Allmamoney in a support race on the same card.

CLICK HERE to watch the replay of Zangief's Bunbury win.