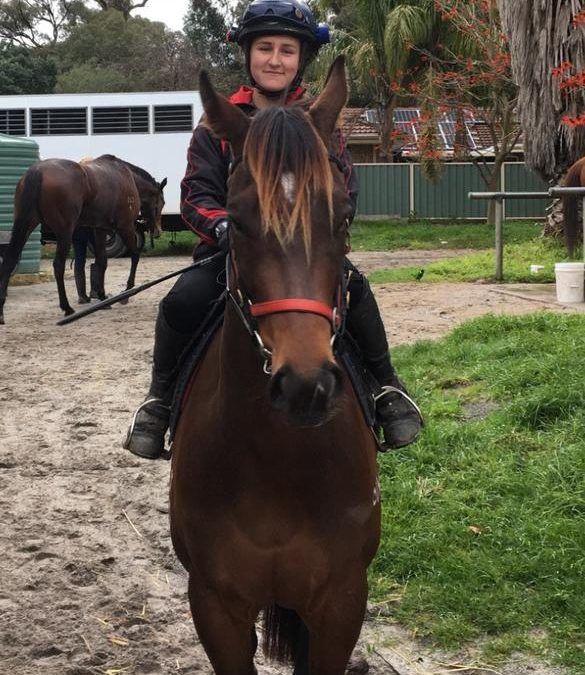 Pearce Racing apprentice Jessica Gray is set to have her first race-ride at Carnarvon on Saturday.

Gray, 21, began her jockey apprenticeship less than 12 months ago and rode her in first trial at Lark Hill on November 11 last year.

The hard-working apprentice has now ridden in 40 trials and will have her first ride on the Michelle Valentine-trained gelding, Scotsdale, in the Sandhurst Security Handicap at Carnarvon’s Juntion Cup meeting.

Born and bred in Tenterden, one-hour north of Albany, Gray developed a love for horses from an early age after getting her first pony at age six.

She went on to compete in various show-jumping and one-day-events throughout her high-school years before landing a job with Albany-based trainer Peter Western riding trackwork when she was 18.

“I started at Peters’ and then I rode through the off-season in winter for Steve Wolfe,” Gray said.

“Then I went to Paul Hunters’ and he really helped me get into it more.”

Speaking with Gray it is clear how much she values Hunter’s help and guidance.

“I was going to be Paul’s apprentice but he said I should go to Perth during winter to get some good experience because three months off would have been really bad for me at that stage,” she said.

“He called Ben [Pearce] because Paul’s daughter, Casey, was apprenticed to him and then Ben put him onto Daniel [Pearce].

“Paul arranged it all for me and wanted to make sure I went to a good place where they would look after me so I wouldn’t be here if it wasn’t for him.”

Gray started riding for Pearce in the second-half of June last year and signed on as his apprentice just two months later.

“Ben and Dan have been great from the start,” she said.

“They always give me good advice and push me to stay motivated.

“I really appreciate the opportunities they’ve given me.”

Gray developed a strong bond with the Pearces’ former top sprinter, Travinator, the winner of 10 races and more than $300,000 in stake earnings, when the brothers used the gelding as a trial-horse for her to learn on prior to his recent retirement.

“Travinator is the best,” Gray said.

“I learnt more in trials on him than any other horse, like using the whip with my left hand, and he always looked after me.”

Gray’s minimum riding weight is listed as 54.5kg, however, she expects it to be reduced in the coming weeks.